Special for Rosh Hashana (The Jewish New Year): Which Moon will we see on the eve of Rosh Hashana, and why does it change every day of the month?

We all know the phases of the Moon.

Sometimes it looks like a crescent, sometimes it’s full and sometimes it doesn’t appear at all. If we followed it closely, night after night, we would see that in every day that passes the Moon changes a little bit: First it looks like a thin crescent in the West[HB1] , close to the Sun up in the sky, right after the Sunset. The next day it grows a little bigger and moves a little further away from the Sun, and the next day the crescent grows a bit more and there’s more distance between it and the Sun. A week later, the Moon looks like a perfect half-circle, and is located in the West[HB2]  of the sky in the Sunset.

The Moon continues to wax, or “grow”, and move away from the Sun until two weeks after it first appeared as a thin crescent, it’s completely full, a circle of light with darker spots in it, and it appears in the East [HB3] when the Sun sets. At this stage, the Moon is shining in its full capacity and follows us throughout the night. After that, the Moon changes direction and begins to wane – get smaller – each night, and shines in later and later hours, until three weeks after it started to appear as a thin crescent (the new Moon), again it looks like a half-circle but is seen only in the wee hours of the night. Later it will keep waning until it once again becomes a thin crescent and will be seen only before the Sunrise. After than it disappears completely for a day or two, and then born again as a thin crescent and starts the cycle all over again.

The Jewish month is determined by the phases of the Moon. The beginning of the Jewish month is set to the first appearance of that thin crescent (in Judaism, this is called the “Birth of the Moon”). The middle of the month occurs when the Moon is full, and that’s why in Judaism most events that take place at night are set for the middle of the month (events such as Tu BiShvat, the Jewish holiday celebrated on the 15th day of the Hebrew month Shevat, also called the “New Year of the Trees.” In contemporary Israel, the day is celebrated as an ecological awareness day, and trees are planted in celebration; and Tu B’Av, the fifteenth of the month Av, which is celebrated as a holiday of love similar to Valentine’s Day). The end of the Hebrew month occurs on the 29th or 30th of the month – when the Moon is not visible at all. It is also called an astronomical new Moon (unlike the Jewish new Moon when, like we said, the smallest crescent appears, marking the first day of the Hebrew month).

To understand why there are different phases of the Moon, we need to understand a few basic principles in astronomy. Before we explain these, please watch this video with Dr. Polishuk, that will make it easier to understand:

The changing phases of the Moon during the month 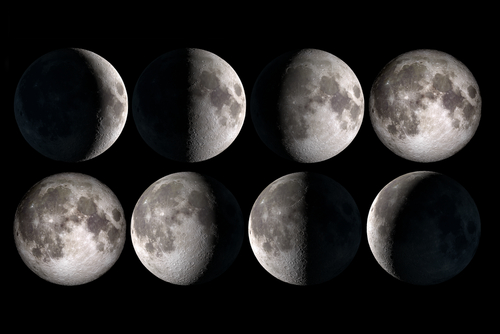 Did you watch the video? Good.

Now, like I promised, here are a few basic principles of astronomy:

The Moon doesn’t have its own light (meaning, it doesn’t produce or emanate light), and neither does planet Earth. The result is that both the Moon and the Earth have areas that are lit at the same time – which gives us the day, and areas that are dark – which gives us the night (we’ll ignore the return of light in these lit areas – it’s a relatively very weak light). The Sun is the only (significant) source of light in our area, meaning, in our solar system. It’s the “Flashlight”.

In order for Earth to cast a shadow on the Moon, or for the Moon to cast its shadow on Earth, the Sun, the Moon and Earth need to be aligned – positioned on one straight line. This is a relatively rare occurrence and is called an “Eclipse” (solar or lunar eclipse), and it has nothing to do with the phases of the Moon (as you’ll see below).

Since the Sun is very far from us, it always lights the half of the Moon that is facing it. In other words, there’s always one lit side and one dark side of the Moon. You can try and see what that’s like if you take a what ball (made of styrofoam) and light it with a flashlight. You can see right away that the half that’s facing the flashlight (or the Sun, in real life) is lit, and the “back” half is dark.

The Moon goes round the Earth for about 29.5 days. This is why lunar months are 29 days and 30 days long, alternately.

And now for the more difficult part:

The orbit of the Moon is inclined about 5 degrees relative to the orbital plane of the Earth around the Sun (the Ecliptic). To understand how that works, let’s put a lamp in the middle of the table. The lamp represents the Sun. Now let’s take a ball (representing the Earth) and circle our “Sun” while rolling the ball on the table. Meaning, the plane of Earth’s orbit around the Sun is the surface of the table. This plane has great importance in astronomy and that’s why it received a unique name of its own – the Plane of the Ecliptic. If the Moon also orbited the earth in the Ecliptic Plane, meaning on our table, the Moon would indeed go into the Earth’s shadow – when it’s positioned behind the Earth relative to the Sun, so that the Earth would block the light from the Sun. These unique conditions happen about twice a year, and they are responsible for the lunar eclipses. As you can see, that is not the case in most times of the year, and has nothing to do with the phases of the Moon.

Now that we understand the previous point, regarding the orbital places of the Moon and Earth, it’s important to understand that the Moon is very far from Earth which is why this small incline in the Moon’s orbital plane in relation to the Earth’s orbital plane is enough so that the Moon doesn’t cast its shadow on Earth when it’s located between Earth and the Sun, and Earth doesn’t cast its shadow on the Moon when it’s located between the Moon and the Sun.

Now let’s ignore for a moment that there’s an incline or “tilt” in the Moon’s orbit, since it’s not possible to see it in an illustration showing us an overview. The phases of the Moon can be seen from Earth because of the angle from which we look at the lit side of the Moon.

As you can see, it’s difficult to explain it in words, so please take a look at the photo gallery to see the picture showing the Moon’s different locations around the Earth in the course of one month. Note that in every position in the Moon’s orbit, its lit side looks different because of the angle of our observation from Earth. Note especially the lit side of the Moon that is facing Earth, which is in fact the visible part of the Moon. You need to remember that the Moon is a sphere, so you’ll need certain spatial vision to understand why the piece that is lit in the illustration looks like a phase when viewed from Earth.

To better understand these factors, we recommend that you build a model of the moon, half black and half white, and look at it from different angles like Dr. Polishuk did in the video.

You can also track the phases of the Moon on your own, and download a special action page that will help you track it.

Cancel reply
* Your email address will not be published.
Design by: DVIVO | Built by: Alice Eitan